Why I Vote (and Why I Spoiled My Ballot) 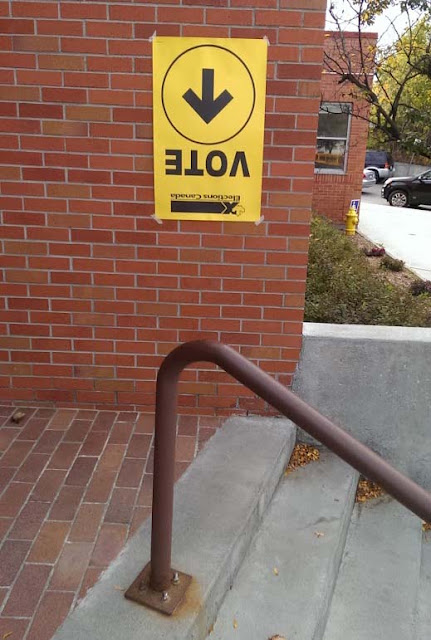 I arrived at the polling station this afternoon to see this, and it pretty much summed up my feelings about the whole election.

The first big mistake Stephen Harper made was to double the length of this election cycle - 78 days, over twice the minimum allowed in the 1996 Elections Act. It's not as harrowing as the American election cycle, which lasts four years and starts before inauguration, but it's a step closer, and makes democracy seem like a punishment. I can't speak for anyone else up here, but the effect it had on me was to give me more than enough time to realize how much I hate politicians - all politicians.

I certainly didn't have a lot to choose from in my riding, which elected its last Tory before I was born, and only sent an NDP MP to Ottawa in the last election, which hindsight seems to be painting as a freak. 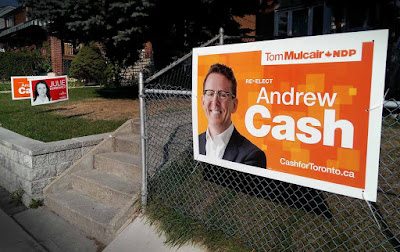 I knew I wasn't going into this election a partisan voter, and based on what I'm seeing now as the results come in, I wasn't alone, at least on the conservative side. I wasn't the last time around, four years ago, but at least then my ballot gave me an outlet for my frustration - not one, but two libertarian parties quixotically contesting the riding. After a bit of Googling, I determined which one was the less sophomoric and off-putting and made what was, ethically if not technically, a protest vote.

If nothing else, that ballot provided me with a punch line to any future jokes about the self-sabotaging tendencies of fringe politics in general, and libertarians in particular.

I can't remember why I didn't vote Tory the last time around, but I know that this time it was impatience with Stephen Harper and distaste for at least three of his platforms.

Bribing me with my own money was one of them. As much as I'm shocked at having mysteriously arrived in the middle class, it's never comforting when politicians try to tell me they're my friend. And when they try to grease the unwelcome intimacy with what amount to bribes they insist on calling tax cuts, my gag reflex kicks in.

Sure I like having more money to spend on my kids and a bit more budget for home renos would be nice - that brown '70s kitchen isn't going to replace itself - but I'd like to get that from actual tax cuts that everyone can enjoy and not targeted goodie bags.

I didn't like Bill C-51, either. Not that I'm against fighting terrorism or giving law enforcement the tools to do it, but badly-written legislation is a time bomb. I'm suspicious of any new law, but when they potentially target free speech and legitimate protest thanks to imprecise language like "terrorist propaganda" I can see the overreach waiting to happen. Just look at the Department of Homeland Security to see how expanded powers, well, expand - in all directions.

Most of the people who protested C-51 liked to paint it as Harper creating a police state; I saw it turning really toxic under some future administration with a different definition of an "internal enemy." The "Stop Harper" crowd have always looked like they were fighting a nemesis created in their own imagination and fitted with Harper's face; I didn't see an evil leader but an evil law, with the potential for real trouble when political opportunism and cynicism (inevitably) finds the other side of the blade.

Which brings me to the niqab, which will probably be called the iceberg that holed Harper's Titanic. Maybe it was; it was certainly the issue that energized opposition to Harper when election fatigue was setting in. Now I'm as against masks and covering women with sacks as any putative Islamophobe with daughters, whose understanding of liberal principles bridles at such things.

I would have liked, however, if Harper could have framed his late-in-the-game attack on the niqab more rationally - like how covering your face in ID photos or while giving testimony (or voting) makes a joke of the essential functions of bureaucracy or law or democracy. Instead it was the image of a niqab at a citizenship ceremony that became Harper's boogeyman - a wholly ceremonial ritual where it's intent and not identity that's recognized.

Never mind that, as a religious person and the world's worst Catholic, I have very good reasons to be afraid of laws that - thanks to the bafflingly imprecise language that ends up framing legal definitions - will be inevitably turned around on anyone's religious customs when some malicious lawyer or Supreme Court justice with a hunger for precedent becomes creative with interpretation.

I understand that "religious freedom" - like "free speech" and "the right to bear arms"  - is a concept regarded with far less reverence here than in the U.S., where there's a written Constitution with more vigorous definitions bolstered by two centuries of inspired debate. Which is why I have every reason to expect that good intentions will become predatory legal rulings and punitive bureaucratic punishment here. It's happened before.

Was it too much to ask my country's leader to get me to vote for his party  by treating me like a rational adult?

Which is why I showed up at the polling station expecting not to vote for my Conservative candidate. This time around, though, I didn't intend to vote for anyone.

Years ago, a high school friend sold me on voting with the simple maxim: "If you don't vote, you can't complain." I love complaining, so I made sure I voted in every election. No exercised franchise, no soapbox. It was that simple.

Sometimes I have regretted my vote. Other times I could defend it happily. Thanks to the parliamentary system and my choice to live in the country's largest city I have always known, since I first marked my ballot as a "conservative," that my vote would be largely meaningless, as every riding I have lived in has had an electoral history like the one I live in now.

As ever, even if I voted for my Conservative candidate they'd end up polling at best a distant second but more probably a resounding third. I suppose I could vote "strategically," but I've always been rather sentimental about my vote; I consider it a gift to be bestowed on a deserving suitor, not dice thrown in a game of odds. In either case I entered the polling station knowing in my gut that Harper's conservatives were in for a mauling, and I know they knew it, too. No vote, strategic or not, would change that, and I frankly didn't much care.

So with no stomach for the Conservative party and no Libertarian to gift with my protest vote - the only independent running revealed himself as a maniac and a slumlord after a few minutes of Googling - I spoiled my ballot.

I'd never done it before. I looked online to see if there was a "proper" way, but ballot-spoiling is apparently like modern jazz: you can do it with as much style as you want, but most people still won't approve.

My friend and editor Paul Tuns was the first person who ever told me that it spoiling my ballot wasn't just an option, but a principled one. He ended up voting Tory this time around, but his rationalization included a thought that made the conspicuous gesture of a spoiled ballot seem almost creative:


So it's illogical that I'm voting, but that, too, is the beauty of freedom: It doesn't have to make sense.

It wasn't fun. I hope I never have to do it again, but that would mean a future with better politicans and superior politics, and I can't see that happening. Staying at home would be a franchise wasted; making the effort to dig up my papers and identification and walk to the polling place to say "none of the above" isn't apathy, but it is an admission that I've slipped away from the apparent majority of the population who can express joy or disappointment at the results of an election. I can still complain, but without much passion or outrage; this time around, I didn't think anyone had a better idea.

Posted by rick mcginnis at 2:18 AM